From NCPA to Chowpatty, a March for Kathua Girl

Many marchers were moved to tears by Asha Devi’s words
SoBo residents, including Dolly Thakore and Milind Deora, turned out in large numbers to protest the Kathua and Unnao rape cases on Monday.

Mumbai saw the third of its marches to protest the Kathua and Unnao rape cases on Monday. Residents of South Mumbai came out in large numbers to protest the two incidents that have shaken the country. Some 400 of them walked from NCPA to Chowpatty, in their summer dresses and designer kicks, braving the heat and gawkers along Marine Drive. Since the police had not given permission for the march, disappointed participants were asked by the organisers to put away their placards and banners and walk in groups of four or five, so that the protest looked less like an organised gathering and more like an impromptu evening walk. Indeed, for many of the marchers — residents of Peddar Road, Malabar Hill, Altamount Road and other chi-chi neighbourhoods — it could have been just a regular day, with them out on their evening walk along Marine Drive. And every now and then, placards and signs would be whipped out for a quick selfie or Insta-worthy group photo, and put away just as quickly.

SoBo celebs like Dolly Thakore, Milind Deora, Ashima Narain, Divya Mohta, Vandana Kasbekar, Trisha Shetty, Anahita Oberoi, Malavika Sanghhvi, Farhad Taraporewala, Aarti and Kailash Surendranath, were joined by students, principals of schools and colleges, artists, designers, musicians, writers and creative and business folk from other parts of town as well, in their solidarity walk. Singer Anushka Manchanda, sporting a ‘rape-roko’ T-shirt to draw attention to the campaign started by the Delhi Commission for Women head Swati Maliwal, said, “We’re here today because something drastic needs to happen. Our outrage needed an outlet.” Designer Namrata Mathur said she had joined the march after hearing about it on social media and through word-of-mouth. In fact, she almost didn’t make it because earlier in the day, the organisers had briefly thought to call off the protest because the police had denied them permission for the March. “But this protest has nothing to do with caste, creed, religion or race,” says Mathur. “It’s a protest against the evil that exists in humanity.” 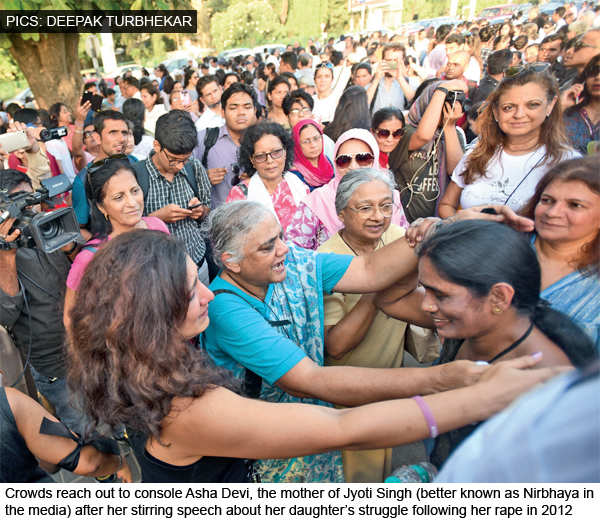 Despite his advancing years, writer Kiran Nagarkar said he was more than happy to join the march. “With all the unbelievably evil things that are happening all around us, it’s the least I could do,” he says.

Sister Doreen, 75, of St Anne’s school, who was seen walking with her friend Ferzi, 82, said: “Minorities have been feeling extremely threatened now. This rape has been a stigma. We must all fight out.’’

Many of the protesters stayed till the end, when the parents of Jyoti Singh (known in the media as Nirbhaya), Asha and Badrinath Singh, magically appeared among the crowd. The organisers had flown them down to clearly add heft to the event. When Asha Singh said, “Every protest is like a tribute to my daughter. We need many more marches like this to make a difference,” outsized designer shades were pushed up to wipe away tears and hands reached out to Singh to envelop her in tight hugs. Then, just as quickly as they had appeared, the Singhs were whisked away, as the police decided to break up the gathering. And the marchers hopped into the long line of BMWs, Mercedes SUVs and Porches that had been trailing alongside them on the road, their taillights blinking, and disappeared. 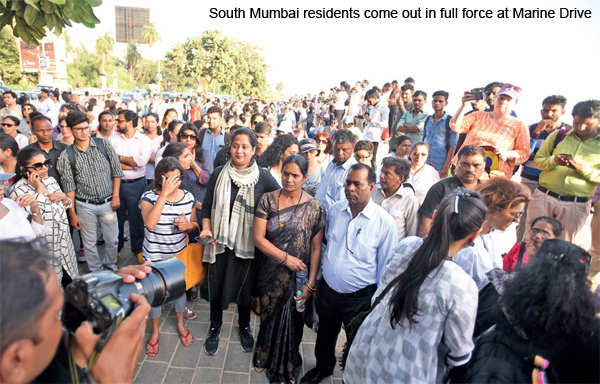